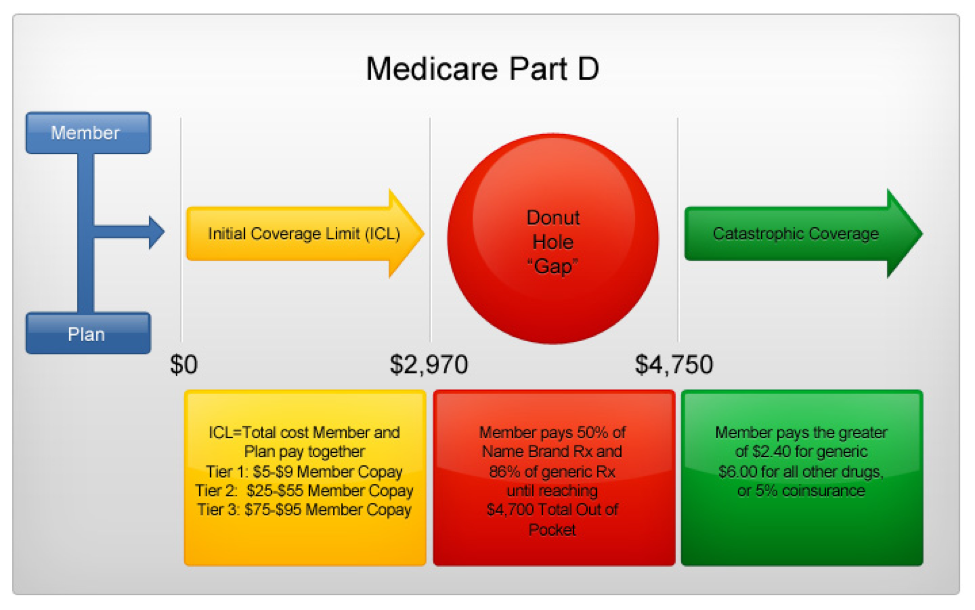 Medicare Part D, is also known as a Prescription Drug Plan or “PDP,” was created under the Medicare Modernization Act of 2003 to assist in covering the costs of prescription drugs. Prescription drug coverage is only offered by private companies contracted with Medicare through stand-alone plans (for beneficiaries who have Original Medicare) and through HMOs, PPOs, and PFFSs (for beneficiaries who have a Medicare Advantage plan). Everyone who has Original Medicare or Medicare Advantage is eligible to enroll in Part D. Enrollment in Part D is voluntary.

What is covered under Part D?
Private companies that offer Part D coverage are permitted to propose their own benefit plans, as long as the overall value of the plan is at least as good as the basic plan outlined in the 2003 Medicare Act. Different plans offer various lists of covered medicines (called a formulary), and at different costs. Beneficiaries should evaluate the various drug plans available in their area to find the one that best fits their needs.

What is not covered?
Some drugs are not required to be covered by Medicare Part D, including:

The cost of the late enrollment penalty depends on how long you didn’t have creditable prescription drug coverage. Currently, the late enrolment penalty is calculated by multiplying 1% of the “National Base Beneficiary Premium” which is $33.13 for 2015, times the number of full, uncovered months that you were eligible but didn’t join a Medicare drug plan and went without other creditable prescription drug coverage. The final amount is rounded to the nearest $.10 and added to your monthly premium.

What our clients say

“Jason has been very good to help me through this process. He is always very prompt with returning my calls and addressing whatever issued I might have. He has been my agent for quite some time and I would highly recommend him.”

“Jason helped me, my wife, and my mother-in-law. He has been there through the process and beyond. It is nice to call someone who knows my name and my story when I have an issue or a question.”

“Jason was referred to me by a friend. Anytime I have an issue with my Medicare coverage I call him and he takes care of it. His after the sale service has been such a blessing to me. I don’t know what I would do without him”

“I got sick shortly after Jason helped me. If it hadn’t been for him, we would have had to sold the family farm. I refer everybody I know to him and he has also helped my husband. He has been a true blessing to my family. It is has been wonderful having Jason as my advocate.”

Jason was recommended by a friend and we are truly grateful. He immediately set us at ease with his professional and understanding manner and gave us confidence that we had come to the right place for guidance through the jungle that is Medicare insurance.